The Austerity Politics of White Supremacy

Since the end of the Confederacy, the cult of the “taxpayer” has provided a socially acceptable veneer for racist attacks on democracy.
Click to expand...

A composite photograph of South Carolina's majority-black legislature created and circulated by opponents of Reconstruction (Library of Congress)
Click to expand...

This is a good but kinda long read. Its on the start of racist using the guise of "fiscal conservative" to overthrow the multiracial reconstruction- era government in the South, that was trying to reform the country after the civil war. Also speaks on them continuing to use that guise it in modern times. I'm not going to post all of the article here, just an excerpt, because its long and I'd like yall to click the link to read the rest and give the author clicks & traffic. 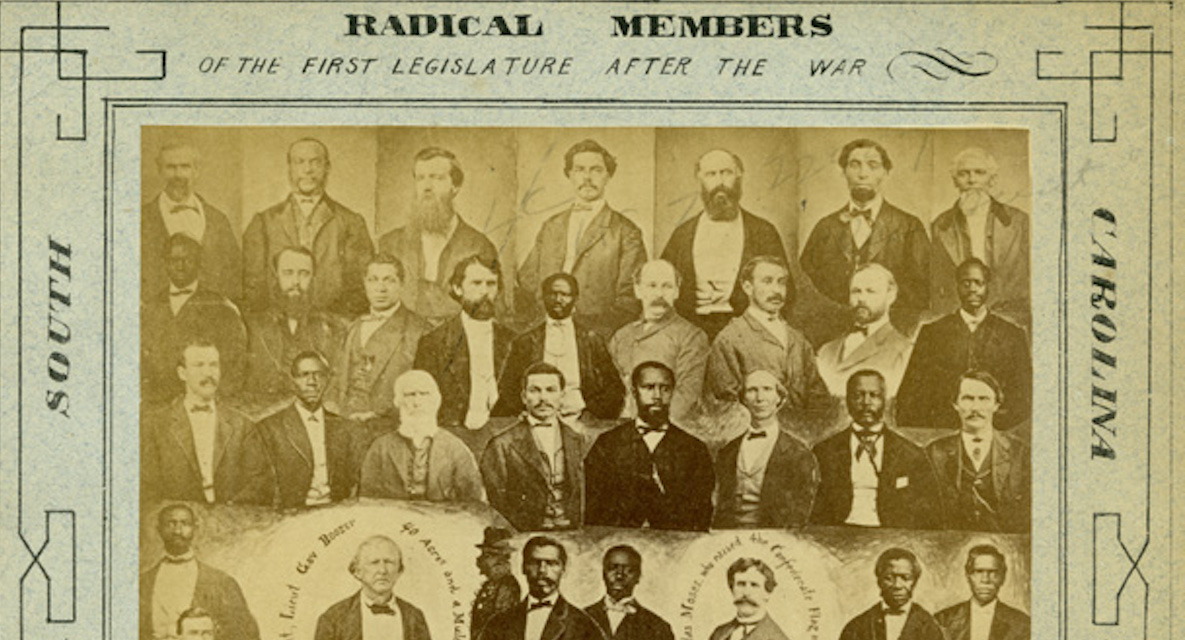 Since the end of the Confederacy, the cult of the “taxpayer” has provided a socially acceptable veneer for racist attacks on democracy.

From the Southern strategy of the 1960s to Donald Trump’s refusal to concede the presidential election, it is easy to trace the Republican Party’s decades-long descent into racial authoritarianism. Despite the president’s unhinged response to the election results, the real locus of power is the Senate, where Republican legislators have been striking sober-sounding notes about the need for smaller government, an end to relief spending, and the danger of higher taxes. Those desperate to see a return to normalcy may hail this born-again fiscal conservatism as a departure from Trump’s racist, antidemocratic politics. Historically speaking, this is a false distinction.

Long before Barry Goldwater and Ronald Reagan, the dog-whistle rhetoric of austerity provided a socially acceptable veneer for racism. And long before the Trumpist GOP, the agenda of the American right was undermining democracy and passing tax cuts for the rich. When the former Confederate elite mobilized to successfully overthrow the multiracial Reconstruction-era governments in the South 150 years ago, it was under the banner of fiscal conservatism.

In the South after the Civil War, under the protection of federal troops and a radical Republican Congress, black legislators in coalition with white allies from the North and from the South’s poorer regions set to work rebuilding their states’ infrastructure and constructing a public school system. Reconstruction-era economic policies were relatively moderate, eschewing land reform, but included new forays in social spending in support of the poor and sick, as well as efforts to increase the taxes paid by landowners.
Click to expand...

Across the South, the planter class engaged in massive resistance to the new state governments. The campaign came to be known as the “Redemption” of the South, and its participants as “Redeemers.” In South Carolina, democratic rule posed a particularly big obstacle to the opponents of Reconstruction; the majority of the state was black, and under universal male suffrage, a majority of the state legislature was black, too.

South Carolina’s white elite developed a two-part strategy of opposition. First, they focused their critique of Reconstruction on rising government debt and excessive spending, painting government by black people and poor whites as intrinsically corrupt. Adopting a new identity as concerned taxpayers helped the rich bridge the divide with small white farmers, for whom new land taxes were heavy, while avoiding explicit opposition to black male suffrage, which might smack of treason to Northerners.
Click to expand...

You seems to be on your way from becoming the new Me, judging by the absence of feedback in your mind-boggling essay-lenght expose...

... almost a surprize they haven't pettily blocked you or attemptively banned you for a while either.

JohnSmithCAN said:
You seems to be on your way from becoming the new Me, judging by the absence of feedback in your mind-boggling essay-lenght expose...

... almost a surprize they haven't pettily blocked you or attemptively banned you for a while either.
Click to expand...