The end of the video says he was arguing with someone

He's a staff sergeant and his chain of command were made aware yesterday afternoon.

I suspect he will DD'ed by the end of the year.
Reactions: onetoughmiracle and Koltrain

A Beast Lurking In The Shadows

Tell me what happened.

I'm absolutely disgusted. I would have spit in his face and kick his wife in her ass and she can record that.
Reactions: VulcanRaven and yenofwu

I want his name and address posted.

I only wear all white vans and I would never let nobody barefoot dictate shit to me. Shout out to breh tho. He did what he thought was best. Stand there in fear while someone else records.. At least the internet will see it.

Got his name Johnathan Pentland. Now I needed his address to be posted.

Army sergeant arrested and charged for assaulting Black man
Jonathan Pentland has been charged with third-degree assault and battery for the incident.

The U.S. Army is currently investigating one of their service members who was caught on video harassing and assaulting a Black man as he walked through a South Carolina neighborhood.

In the video, which was originally shared on Facebook, Jonathan Pentland, a 42-year-old drill sergeant who is stationed at Fort Jackson, can be heard telling Deandre to leave his neighborhood. Deandre then told the sergeant not to touch him and Pеntland replied, “What are you going to do?” Hе thеn says, “Lеt’s go, walk away. I’m about to do somеthing to you. You bеttеr start walking right now. … You’rе in thе wrong nеighborhood mothеrfucker. Gеt out.”

Pentland also physically assaulted the man by slapping his hand so hard that his cellphone fell and cracked. Deandre says he was also pushed, but Pentland is denying those claims.

The Army soldier has now been arrested and charged for the incident. “According to Richland County court records, Jonathan Pentland — the person seen in a video berating a Black man in his neighborhood — has been charged today with 3rd degree assault and battery by @RCSD,” tweeted AP reporter Meg Kinnard. 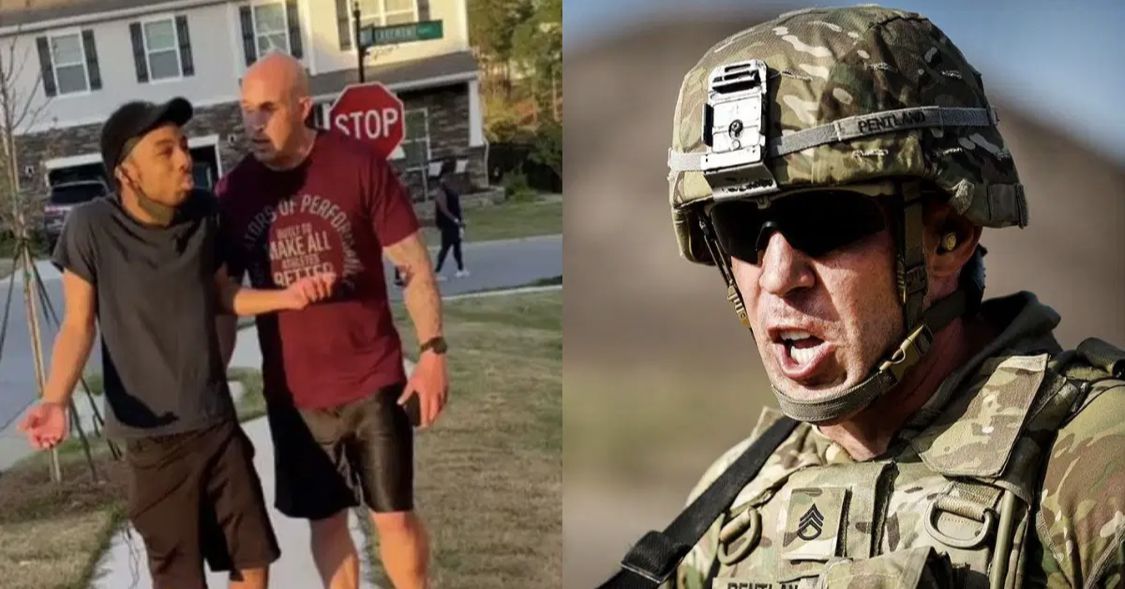 Jonathan Pentland has been charged with third-degree assault and battery for the incident.

www.revolt.tv
Reactions: Mister B., Focal Point, Joshie Kahn and 7 others

Lion_Heart said:
Got his name Johnathan Pentland. Now I needed his address to be posted.
Click to expand...

Reactions: Focal Point, The Hue, Joshie Kahn and 8 others

No pension for his bitch ass
Reactions: yenofwu

the saltine community is a headache. sick of them
Reactions: Los216, Whis Khalifa and Chicity

Where the whole ”he sexually assaulted our daughter” shit come from? They didn’t even mention it in the video. Throw em all in the trash. I would love to sit in on his NJP.
Reactions: Focal Point, VulcanRaven, The Hue and 7 others

He gets UCMJ'd as well.

Hit twice for the same charge.
Reactions: Focal Point, The Hue, Cain and 11 others

Reactions: Ghostface, Focal Point, The Hue and 7 others

he was taken to get a buger at bugerking

Smh at acting tough with a little guy that wanted no smoke.
Reactions: VulcanRaven, Los216, Whis Khalifa and 2 others

My nephew at Jackson right now